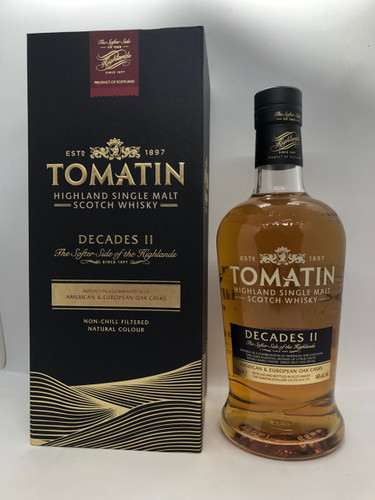 Unctuous with Christmas cake, maple syrup and fresh red berries. In time tropical fruits emerge with orange peel and ginger. The finish exhibits along and waxy element with tropical fruit, chocolate and spice.

Comprising of casks from the last 5 decades from 1970's onwards.

The origins of whisky production in Tomatin are hard to be precise about - the formal distillery which operates today was established in 1897 but there is reason to believe that whisky production, albeit illegal, has been an important part of life in the area around Tomatin since the 1700s.

The name itself gives an insight into this secret past: “Tomatin” translates to “Hill of the Juniper Bush”, as juniper wood gives off no smoke while burning it has long been a favourite of illicit distillers who must keep their practice secret. Today, a building known locally as “The Old Laird’s House” still remains on the site of the current distillery

However, it was only in 1897 at the peak of the Victorian Whisky Boom that three men, John MacDougall, John MacLeish and Alexander Allan, along with a handful of investors,
decided to open a formal distillery on the site and form The Tomatin Spey District Distillery Ltd.

Located south of Inverness, Tomatin was for a time the largest producer of whisky in Scotland and today still remains one of the key whisky producers in the Highlands