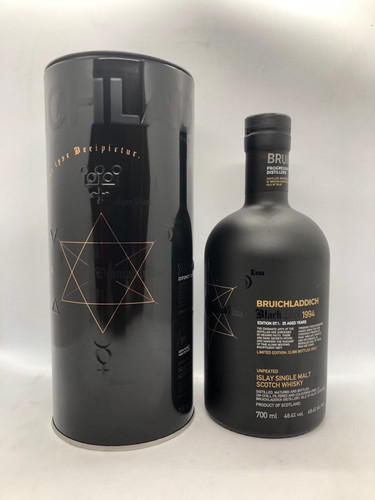 Bruichladdich have released the latest batch of their super secretive Black Art series. This is the third batch to be overseen by head distiller, Adam Hannett, and being the head distiller, the cask make up of this whisky is known only to him. All we know is that it’s created with casks filled in 1994, the last year Bruichladdich was active before being mothballed and subsequently resurrected at the turn of the millennium, which makes this whisky 25 years old. It’s limited to 12,000 bottles and has been bottled at a natural cask strength of 48.4%. Other than that, we’re more or less left to our own devices.

Commenting on the release Hannett said: “The spirit endured in Bruichladdich’s warehouses when the distillery had been forgotten. The quality of the liquid after 25 years is a significant sign of guardianship passing from one generation to the next. I feel quite honoured to have worked with it

Overall: A dark, brooding, and intriguing Bruichladdich. Although the cask recipe is kept secret, the influence of sherry casks in the final whisky is quite apparent, meaning the final whisky is full bodied, rich, and with a real firm oakiness. The clean, coastal notes I associated with most Bruichladdich expressions aren’t quite there (even those which have been lightly sherry-finished), as they’ve been dominated by the oak. Having said that, it’s a bold, moreish dram, which really displays a different side to the spirit. There’s a lot going on, and it’s not at all tired after spending 25 years in cask. Muscular stuff.